I was terrified I would never be able to have sex without a burning sensation.

I waited until I was engaged to have sex for the first time. I was with the man I love, and it was his first time, too. I was ready, and although I was expecting some pain, I was not prepared for how much pain I would experience — neither of us were.

I had read articles and heard stories from friends. I knew that lubricant was going to be a must, so we ran to the nearest Walgreens to grab condoms and lube. Neither of us knew what brand to use, of course. My fiancé grabbed the first ones he saw and we were out of there.

We got back to his apartment, agreed once again that we were both ready, and he slowly tried to slide in. The pain was extreme. In fact, we got it fully in only a few times before we had to stop.

I was discouraged but hopeful. Many women experience pain the first time; I have a small frame and struggled to get a junior tampon in when I first started my period. He reassured me that there was no rush and we would try again another day.

Over the next few months, though, I started to become increasingly worried. Although the pain felt a little different than the first attempt, it was still there. Every time we tried to have intercourse, it burned — it felt like rug burn inside me.

Naturally, I read every article I could find. Most pointed to menopause as the cause for painful sex. But I was in my early 20s; clearly that wasn't my problem. Some articles suggested fear and muscle tensing as the cause. Though I was admittedly beginning to fear sex because of the pain I was now associating with it, that wasn't the case in the beginning, and I was pretty sure that was not my problem.

We were using tons of lube. I wouldn't let that thing near me without it. My now husband suggested that maybe the "warming lube" we were using could be the problem. We tried a different kind, and then another, and another. We got some "all natural" kind from Whole Foods. We tried switching types of condoms. We tried not using condoms as all. Nothing made sex more comfortable.

I was feeling deflated. I was terrified I would never be able to have sex without pain. I began lying to my husband in order to please him, telling him that it didn't hurt when it actually did, but he noticed me wincing.

Finally, I went to the OB-GYN, which I hate doing. I sat there in that room with my oversized gown while she examined me thoroughly. Her exam found nothing wrong: I didn't have cysts or an infection, and my hormone levels were within the normal range. Without any clear diagnosis, she suggested we try a numbing cream or estrogen cream.

Just when I feared I would have to see a specialist, I found coconut oil. 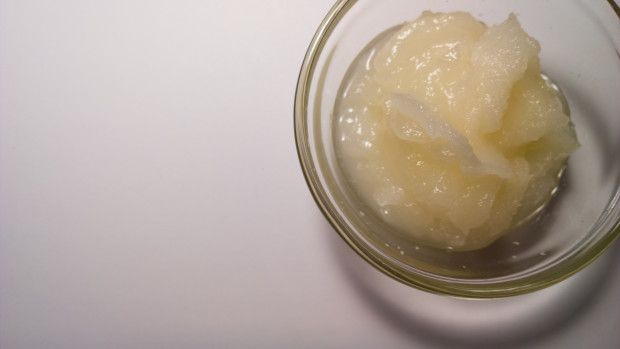 Is there nothing it can't do?

I was reading an article about the numerous uses for coconut oil and one of them mentioned using it as personal lubricant. We tried it and it worked. Finally, sex didn't burn.

Though we haven't had any tests done to prove it, I'm assuming that I must be allergic to some common ingredient in water-based lubricant. Coconut oil was the magic solution. Not only does it not burn, but we can use it as massage oil as well. It's not sticky or goopy, and it can be rubbed anywhere. It's moisturizing, naturally anti-fungal and anti-bacterial. In fact, since switching to coconut oil as lubricant I have not had a single UTI or yeast infection.

Since discovering coconut oil as lubricant, our sex life is great. It's amazing to be able to enjoy it without the burning sensation; I no longer fear sex or try to avoid it. It can't be used with latex condoms, but we're thinking about starting a family soon — something I never would have thought possible before finding coconut oil. We've never gone back to any other sort of lubricant, and I doubt we ever will. I just wish I had found it sooner.